Endless Solo PLAY fun ●
With discounts up to 53%! 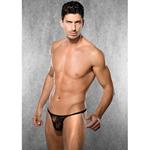 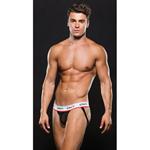 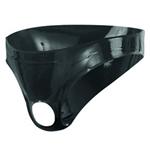 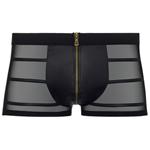 What is sexy men's lingerie?

Who is this lingerie for?

What are the different versions?

Boxer shorts are perhaps the most popular underwear worn by men. Boxer shorts are very comfortable and, unlike men's briefs, have pipes at the bottom. The sexy boxer shorts in this category are form- fitting and range from casual to moderately mischievous . In addition to the classic models, for example, a number of boxer shorts are provided with a transparent fabric. This makes it possible to see through the underwear.

A mens thong is underwear that covers the genitals of the man. The back consists of a small amount of fabric that runs between the buttocks . This leaves your buttocks exposed which can give a very attractive look. Where in the beginning thongs were mainly worn by women, in recent years more and more sexy men's thongs have entered the market. In addition to the casual thong, open strings and transparent strings are also available to make it even more exciting in the bedroom. In addition, there are also fun strings, in the shape of a pig or elephant, available to surprise your partner in a different fun way.

An jockstrap is men's underwear designed to support the male genitalia . The underwear consists of an elastic band with a pouch at the front for the genitals. The back is open and supported by two bands that run from your hips along the buttocks . The male sex is pushed a little forward by the pouch, which has a positive effect on the quality of the sperm. It also provides the necessary cooling. The elastic bands keep the buttocks in place and lift it a bit. The jockstraps thus ensure a pleasant and seductive face. The open back of the jockstraps also makes it possible to quickly switch to anal sex. For that reason, this underwear is often worn by gay men. In that case, the jockstrap can remain on.

How do you clean men's lingerie?

To enjoy your mens underwear as long as possible, we recommend washing the underwear by hand . Let the underwear soak for a few minutes in water no warmer than 30 degrees . Then use a light detergent to soap the underwear. Then rinse the clothes with warm water and later again with cold water. Then wring out the lingerie and let it dry on a rack or hanger. Do not store your underwear until it has dried completely.

You can pay your new Men's Lingerie easily with different secure payment methods, such as visa, MasterCard and PayPal. You can always count on us for a discreet and anonymous handling of your order. You can order your Men's Lingerie easily and quickly online. If you need help, then our advisors are happy to help you to make the best choice.

Look at all the Men's Lingerie on sale: affordable & cheap!

Do you like to experiment? At EasyToys you will always find new products for a competitive price! Our sale page shows you all the current offers for the cheapest and advantageous choices in Men's Lingerie. Buy your new products online with a high discount and keep an eye on our exciting and varying sale page!